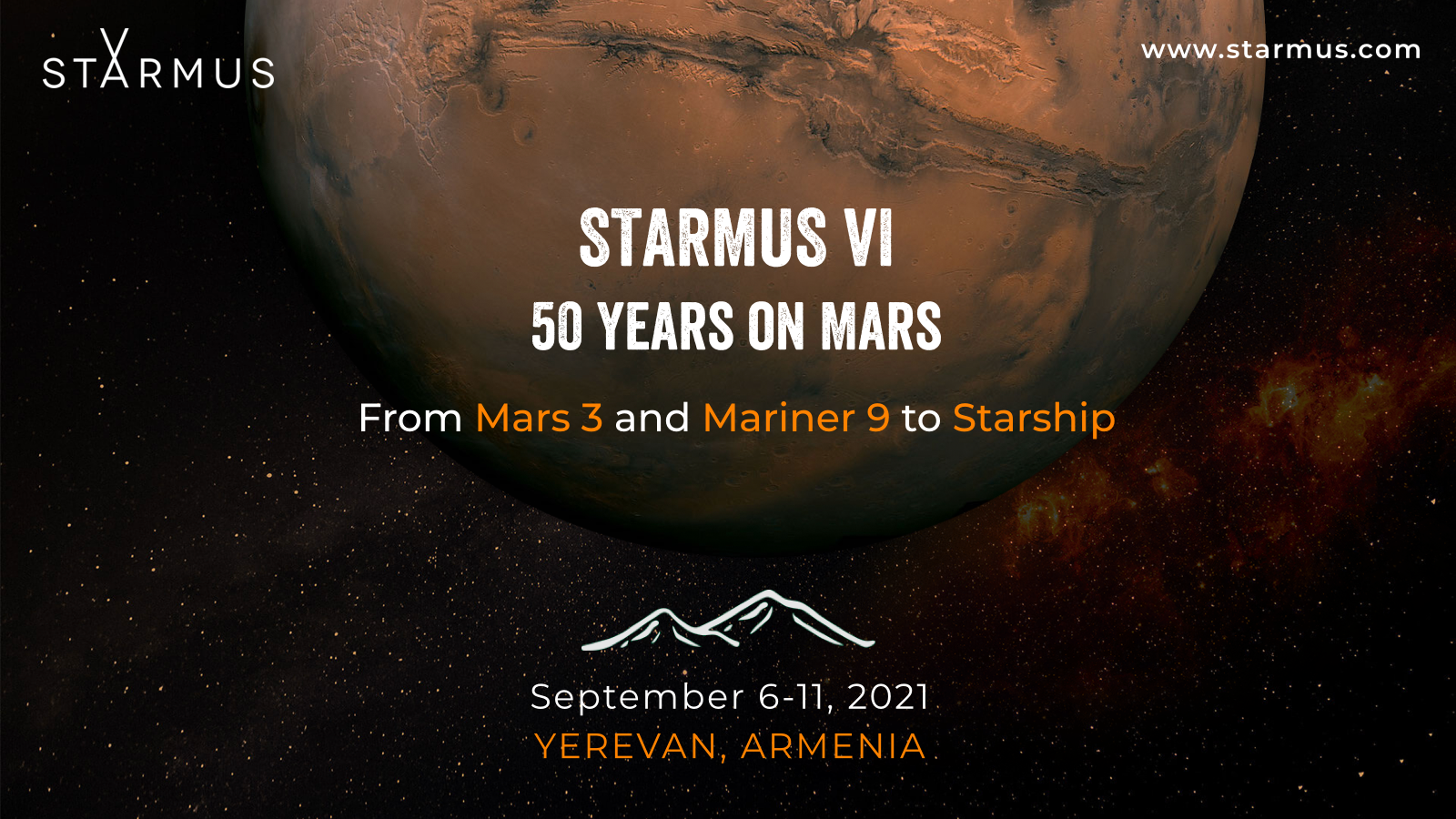 The world-renowned festival supported by Stephen Hawking, Brian May and Alexei Leonov announces a landmark event dedicated to Mars in 2021 for STARMUS VI. Armenia to host.

Armenia will showcase the world’s great scientific minds and Rockstar talent in celebration of Mars exploration.

Yerevan, Armenia – STARMUS , one of the world-scale science and art festivals will take place in September 2021 in Yerevan, Armenia, to celebrate science communication with world-class scientists, artists and astronauts.

STARMUS VI will be dedicated to Mars, from the very first Soviet MARS 3 and American MARINER 9 to the spectacular NASA missions and ambitious manned landing plans of Space X. It has been 50 years since MARS 3 performed the first soft landing on the Red Planet and sent back to the Earth the first data from its surface. The same year, in 1971, NASA´s MARINER 9 became the first Orbiter around Mars. These milestones were followed by dozens of successful missions by NASA providing us with more accurate images and information from our neighbor in the Solar System. In the summer of 2020, three space agencies around the world plan to launch pioneering missions to arrive at Mars in 2021.

Following the established tradition, the Festival will address pressing issues and screen films about the exploration of Mars. Previous film screenings included the documentary Apollo 11 and The Spacewalker, a film about the legendary Russian astronaut and Starmus Board Member Alexei Leonov.

The festival will be held under the high patronage of the President of Armenia, Dr. Armen Sarkissian. The President has invited Starmus to Armenia during his invited speech in 2019 at the opening ceremony of Starmus V “A Giant Leap” in Zurich.

The Ministry of Education, Science, Culture and Sport of the Republic of Armenia (MoESCS) on behalf of the RA Government will support, and working in close partnership with the Ministry of High-Tech Industry of the Republic of Armenia make the festival an outstanding event thus playing an important role in different educational, scientific and artistic activities of the festival.

As in the previous years, the sixth Starmus Festival will welcome to the stage world-class scientists, artists and astronauts to share breakthrough discoveries, reflect upon pressing questions and inspire new generations of scientists and explorers.
The Starmus Advisory board will announce a further line-up of speakers from art and music later this year. Nobel Laureate scientists Edvard Moser and Michel Mayor, Apollo 16 Moonwalker Charlie Duke, co-inventor of CRISPR gene-editing technology Emmanuelle Charpentier and “the father of ipod” and NEST founder Tony Fadell are among confirmed speakers.

Since the very first Homo Sapiens looked up at a star-filled sky we have been awestruck by the vastness of the cosmos. Even today we remain humbled by the sheer immensity of space, especially as through our progress in physics and astronomy, we are now aware of the tremendous distances involved – even to our closest neighbouring stars.

Created by Dr. Garik Israelian, astrophysicist at the Institute of Astrophysics of the Canary Islands (IAC) and Dr. Brian May, astrophysicist and the lead guitarist of the iconic rock band Queen, the Starmus Festival is a combination of science, art and music that has featured presentations from Astronauts, Cosmonauts, Nobel Prize Winners and prominent figures from science, culture, the arts and music.

Stephen Hawking and Alexei Leonov, together with the rock star and astrophysicist Dr. Brian May, worked to create the Stephen Hawking Medal for Science Communication, awarded to individuals and teams who have made significant contributions to science communication. Previous Stephen Hawking Medal winners include Elon Musk, Jean-Michel Jarre, Neil deGrasse Tyson, Brian Eno, Hans Zimmer and The Particle Fever documentary.

The Starmus Festivals join Nobel laureates, eminent researchers, astronauts, thinkers, men and women of science, culture, arts and music to share their knowledge and experiences in the common search for answers to the great questions of today.