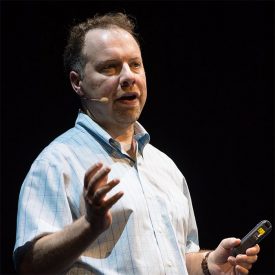 Adam Riess is a Professor of Astronomy and Physics at the Johns Hopkins University and a Senior member of the Science Staff at the Space Telescope Science Institute, both in Baltimore, MD. His research involves measurements of the cosmological framework with supernovae (exploding stars) and Cepheids (pulsating stars).

In 1998 Dr. Riess led a study for the High-z Team which provided the first direct and published evidence that the expansion of the Universe was accelerating and filled with Dark Energy (Riess et al. 1998, AJ, 116, 1009), a result which, together with the Supernova Cosmology Project’s result, was called the Breakthrough Discovery of the Year by Science Magazine in 1998. On the ten year anniversary of this discovery, Symmetry Magazine reprinted the key page from his lab notebook showing the first indication, here, that the expansion of the Universe was accelerating.

He followed this work with a number of studies to test the susceptibility of this measurement to contamination by unexpected types of dust or evolution. To this aim, Dr. Riess led the Hubble Higher-z Team beginning in 2002 to find 25 of the most distant supernovae known with the Hubble Space Telescope, all at redshift greater than 1.Â This work culminated in the first highly significant detection of the preceding, decelerating epoch of the Universe and helped to confirm the reality of acceleration by disfavoring alternative, astrophysically-motivated explanations for the faintness of supernovae (Riess et al. 2004, ApJ, 607, 655).