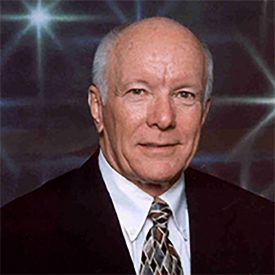 Gerry Griffin joined NASA as a flight controller in Mission Control, specializing in guidance, navigation and control systems for Project Gemini and the early unmanned missions of the Apollo Program. Before the first manned Apollo mission, Apollo 7, he was selected to be a flight director and served in that role for all of the Apollo Program manned missions, including all nine manned missions to the moon, six of which included lunar landings. Gerry was the Lead Flight Director for Apollo 12, Apollo 15 and Apollo 17. His “Gold” team conducted half of the lunar landings made during Apollo: Apollo’s 14, 16, & 17. His team was scheduled to conduct the landing of Apollo 13, but when the landing was canceled as a result of an oxygen tank explosion his team played a key role in the safe return of the astronauts.

Gerry earned a Bachelor of Science degree in Aeronautical Engineering from Texas A&M University (TAMU) and was commissioned as an officer in the United States Air Force. He served four years on active duty, first in flight training, then flying as a weapon systems officer in jet fighter-interceptors. Gerry left active duty and joined the space program as a systems engineer/flight controller at the USAF Satellite Test Center in Sunnyvale, California. In the private sector, he also held senior engineering positions with Douglas Aircraft and General Dynamics/Fort Worth before joining NASA.

After taking early retirement from NASA Gerry was President and CEO of the Greater Houston Chamber of Commerce, a post he held until he joined Korn/Ferry International, a worldwide executive search firm, as the Managing Director of the firm's Houston office.

Today Gerry is a technical and management consultant for a broad range of clients. He remains a Senior Consultant for Korn/Ferry International where he conducts search assignments for very senior level executives primarily in the firm’s global aerospace and defense practice. Gerry was a founding director of Comerica’s Bank of the Hills, Kerrville, Texas; a member of the Advisory Board of Alpha Space LLC in Houston, Texas; a trustee of Schreiner University in Kerrville, Texas; and a member of the Advisory Board of the Texas A&M Engineering Experiment Station, College Station, Texas. He is a former member of the Texas Higher Education Coordinating Board, a former trustee of the Universities Space Research Association, and a Past Chair of the TAMU 12th Man Foundation.

Gerry received numerous awards during his years with NASA including the Presidential Medal of Freedom awarded to the Apollo 13 Mission Operations Team, the NASA Distinguished Service Medal, the NASA Outstanding Leadership Medal, and two NASA Exceptional Service Medals. He is also the recipient of the TAMU Distinguished Alumnus Award, the TAMU Corps of Cadets Hall of Honor Award, the TAMU College of Engineering Alumni Honor Award, the TAMU Aerospace Engineering Department Distinguished Alumnus Award, the honorary degree of Doctor of Humane Letters from the University of Houston Clear Lake, and the Tau Beta Pi Eminent Engineer Award. Gerry is a Fellow of the American Institute of Aeronautics and Astronautics and the American Astronautical Society.

Gerry is an active general aviation pilot and aircraft owner, and holds a commercial license with an instrument rating for single engine aircraft, multi-engine aircraft and helicopters.