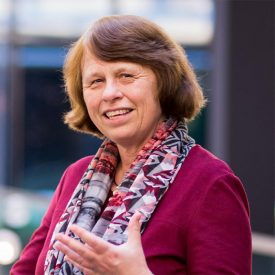 Ewine Fleur van Dishoeck is a Dutch astronomer and chemist. She is Professor of Molecular Astrophysics at Leiden Observatory, and the president-elect of the International Astronomical Union.

She is a member of the Royal Dutch Academy of Sciences since 2001 and the U.S. National Academy of Sciences. She received the Albert Einstein World Award of Science in 2015, the Gothenburg Lise Meitner Award in 2014, the Spinoza Prize in 2000, the Bourke Award of the Royal Society of Chemistry (UK) in 2001 and the Gold Medal of the Royal Dutch Chemical Society in 1994. She works on interstellar molecules; physical and chemical evolution during star formation and planet formation; submillimeter and mid-infrared astronomy; basic molecular processes; and the radiative transfer of line and continuum radiation.

She was a Junior Fellow of the Harvard Society of Fellows.

Van Dishoeck is married to Tim de Zeeuw, also a professor of astronomy at Leiden University and Director General of the European Southern Observatory.