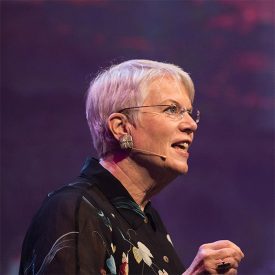 Astrophysicist and SETI (Search for Extraterrestrial Intelligence) pioneer. Tarter holds the Bernard M. Oliver Chair for SETI Research at the SETI Institute in Mountain View, California, and is a Fellow of the American Association for the Advancement of Science and the California Academy of Sciences.

She was named one of the 100 most influential people in the world by Time Magazine in 2004. She was awarded the Telluride Tech Festival Award of Technology (2001), the Carl Sagan Prize for Science Popularization (2005) and the 2009 TED Prize. Dr Tarter’s astronomical work is illustrated in Carl Sagan’s novel Contact. In the film version of Contact the protagonist, Ellie Arroway, is played by Jodie Foster. Arroway was ‘largely based’ on Tarter’s work.

Dr Tarter has spoken around the world and has published dozens of articles about SETI to engage earthlings across the planet in this important search and to encourage young people to pursue careers in science, engineering and technology.