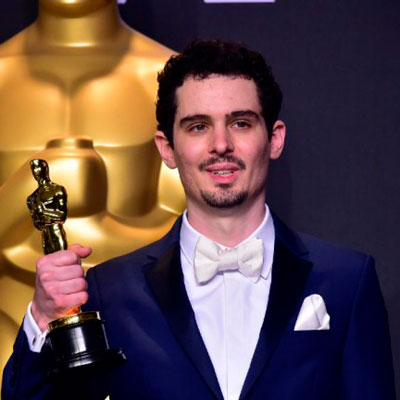 Damien Chazelle (born January 19, 1985) is a French-American director, film producer, and screenwriter. He made his feature film directorial debut with the musical Guy and Madeline on a Park Bench (2009) and followed it with his breakthrough film, Whiplash (2014). The latter received five Academy Award nominations, including Best Picture and Best Adapted Screenplay.

Chazelle received widespread recognition in 2016 for writing and directing the musical film La La Land, starring Ryan Gosling and Emma Stone. It emerged as one of the highest-grossing musicals of all time and received a record-tying fourteen Oscar nominations, winning six, including Best Director, making Chazelle the youngest winner in that category. He also received several other accolades for the film, including the Golden Globe Award for Best Director. He reunited with Gosling for his next feature, First Man (2018), a biopic of Neil Armstrong.