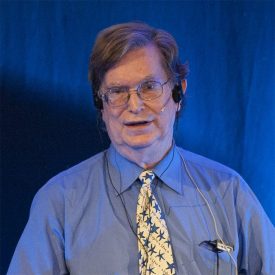 An astrophysicist at the University of California Berkeley (USA), Professor Smoot won the Nobel Prize in Physics in 2006 for his work on COBE with John C. Mather that led to the measurement of the anisotropy and blackbody form of the cosmic microwave background radiation. He is a senior scientist at LBL and, since 2010, a professor of physics at the Paris Diderot University, France. In 2003 he was awarded the Einstein Medal. George Smoot is a collaborator in the design of the Supernova/Accelleration Probe (SNAP), a satellite planned to measure the properties of dark energy. He reached the final question, which he correctly answered, becoming the second person (and first male) to win the one million dollar prize. Professor Smoot has spoken at TED and written (with Keay Davidson) Wrinkles in Time, a popular book about cosmology.