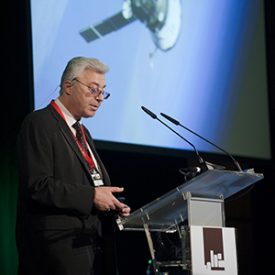 Yuri Baturin graduated at the Moscow Institute of Physics and Technology. In 1980 he also graduated at the Law Institute of Moscow State University, where he also obtained a doctorate in laws. A former politician, he has been Head of National Security and has served on the National Defence Council. In 1997 he was selected as a cosmonaut. In 1998 he flew on Soyuz TM-28/Soyuz TM-27 as a research cosmonaut and in 2001 on Soyuz TM-32/Soyuz TM-31 as flight engineer.