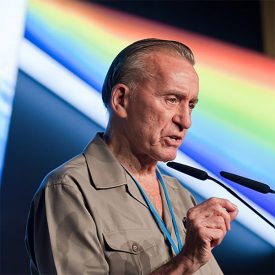 Ronnie Walter Cunningham (born March 16, 1932), better known as Walt Cunningham, is a retired American astronaut. In October, 1968, he was the lunar module pilot for the eleven day Apollo 7 mission. The first manned test flight of the third generation US spacecraft. Cunningham participated in and executed maneuvers enabling the crew to perform exercises in transposition and docking and lunar orbit rendezvous with the S-IVB stage of the Saturn IB launch vehicle.

He has also been a fighter pilot, physicist, entrepreneur, venture capitalist, author of The All-American Boys, lecturer, and host of the radio show Lift-off to Logic. After high school, Cunningham joined the US Navy in 1951, and began flight training in 1952. He served on active duty as a fighter pilot with the U.S. Marine Corps from 1953 until 1956. From 1956 to 1975 he served in the Marine Corps Reserve programme, ultimately retiring at the rank of Colonel. Cunningham received his Bachelor of Arts degree in 1960 and his Master of Arts degree in 1961, both in Physics, from the University of California at Los Angeles. He then worked as a scientist for the Rand Corporation while pursuing a doctorate. While with Rand, he worked on classified defense studies and problems of the earth’s magnetosphere.