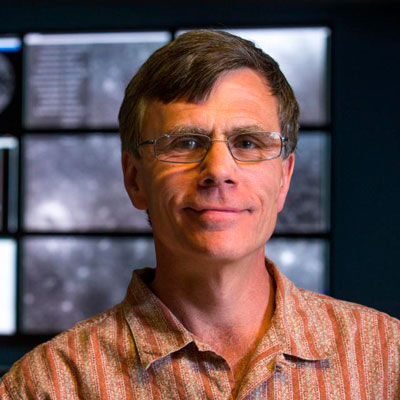 Mark Robinson, Arizona State University (ASU) – Dr. Robinson is a Professor of Geological Sciences in ASU's School of Earth and Space Exploration, and serves as the Principal Investigator for the imaging system on NASA's Lunar Reconnaissance Orbiter. In addition, Dr. Robinson studies Mercury's geology and maps its surface using image analysis and stereogrammetry.

Dr. Robinson's research interests are currently focused on the origin and evolution of planetary crusts, including volcanism, tectonism, and regolith development. His investigations are approached using a variety of remote sensing techniques and utilizing datasets from a dozen NASA missions. Dr. Robinson's graduate school took him to the University of Hawaii, where he worked with researchers studying Mars, Mercury and the Moon. Later, he worked on the Clementine mission that studied the Moon.

Dr. Robinson has also recalibrated old data from the Mariner 10 mission to Mercury (1973-1975) in collaboration with Paul Lucey of the University of Hawaii. Their work used geological inferences, plus a complex algorithm, to extract compositional information about the surface rocks; this information had lain hidden in the old data for roughly 20 years. Much of his current research efforts focus on expanding on our knowledge of the lunar surface, paving the way for future human and robotic exploration of the Moon.