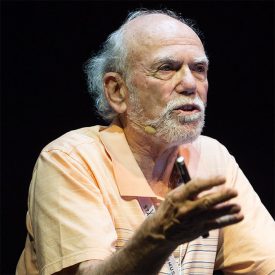 Barry Barish is the Linde Professor of Physics, Emeritus at California Institute of Technology.  He is a leading expert on gravitational waves, having led the Laser Interferometer Gravitational-wave Observatory (LIGO) project as the Principal Investigator and Director from the beginning of construction in 1994 until 2005. During that period, LIGO detectors reached design sensitivity and set many significant limits on Astrophysical sources. The more sensitive Advanced LIGO proposal was developed and approved while Barish was Director, and he continues to play an active leading role in LIGO. On Sept 14, 2015, LIGO detected the merger of two 30 solar mass black holes.  This dramatic observation represents the first direct detection of gravitational waves, since they were predicted by Einstein in 1916, and the first ever observation of the merger of a pair of black holes.

Barish's other noteworthy experiments include an experiment at Fermilab using high-energy neutrino collisions to reveal the quark substructure of the nucleon. These experiments were among the first to observe the weak neutral current, a linchpin of the electroweak unification theories of Glashow, Salam and Weinberg.

Barry Barish is also the former Director of the Global Design Effort for the International Linear Collider (ILC). The ILC is the highest priority future project for particle physics worldwide, as it promises to complement the Large Hadron Collider at CERN in exploring the TeV energy scale.