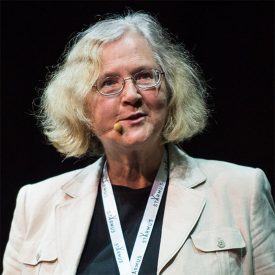 Dr. Blackburn is a leader in the area of telomere and telomerase research. She discovered the molecular nature of telomeres-the ends of eukaryotic chromosomes that serve as protective caps essential for preserving the genetic information – and discovered the enzyme telomerase, which replenishes telomeres.

Blackburn is currently a Professor in the Department of Biochemistry and Biophysics at University of California, San Francisco, where she is working with the goal of understanding telomerase and telomere biology. She is also a Non-Resident Fellow of the Salk Institute.

Throughout her career, Blackburn has been honored by her peers as the recipient of many prestigious awards, including The Albert Lasker Medical Research Award in Basic Medical Research in 2006. In 2007, she was named one of TIME Magazine’s 100 Most influential People and she was the 2008 North American Laureate for L’Oreal-UNESCO For Women in Science. In 2009, Dr. Blackburn was awarded the Nobel Prize in Medicine or Physiology.