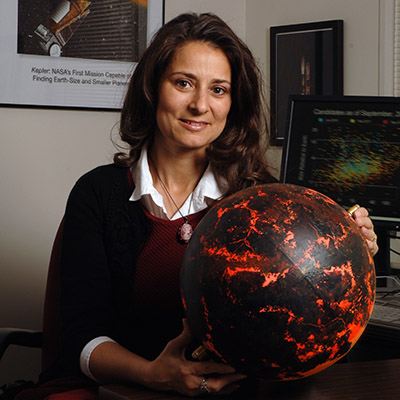 Natalie Batalha is a research astronomer in the Space Sciences Division of NASA Ames Research Center. She holds the position of Co-Investigator and Kepler Mission Scientist on the Kepler Mission, the first mission capable of finding Earth-size planets around other stars.

Batalha began her career as a stellar spectroscopist, studying sun-like stars. She holds a bachelor's degree in physics from the University of California, Berkeley, a doctorate in astrophysics from UC Santa Cruz, and completed a post-doctoral fellowship in Rio de Janeiro, Brazil.

In 1997, William Borucki added Batalha to the science team and she started work on transit photometry. She has been involved with the Kepler Mission since the design and funding, and as one of the original Co-Investigators was responsible for the selection of the more than 150,000 stars monitored by the telescope. She now works closely with team members at Ames Research Center to identify viable planets from the data of the Kepler mission. She led the analysis that yielded the discovery in 2011 of Kepler 10b, the first confirmed rocky planet outside our solar system.

In 2017, Batalha and two other exoplanet scientists were named to Time Magazine's 100 Most Influential People in the World.