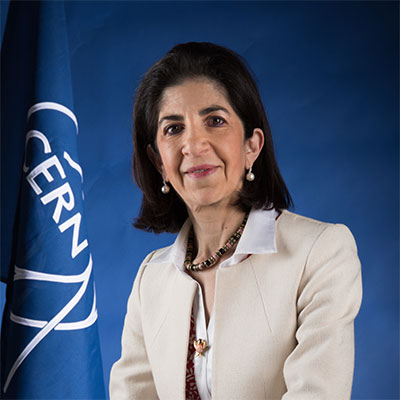 Fabiola Gianotti is an Italian particle physicist, the CERN (European Organization for Nuclear Research) Director-General, and the first woman to hold this position. Her mandate began on 1 January 2016 and runs for a period of five years.

Dr. Gianotti received a PhD in experimental particle physics from the University of Milan in 1989.

In 2009 Gianotti was elected as the project leader and spokesperson of the ATLAS project at CERN, which involved a collaboration of around 3,000 physicists from 180 institutions in 38 countries. ATLAS was one of the two experiments involved in the observation of the Higgs boson. On 4 July 2012 Gianotti announced the discovery of the particle. Until then, the Higgs boson was a theoretical part of the standard model in particle physics theory to explain how some fundamental particles acquire mass. Gianotti's deep understanding of many ATLAS aspects and her leadership were recognised as major factors in the discovery.

She appeared in the 2013 documentary film Particle Fever, about the work of the Large Hadron Collider.