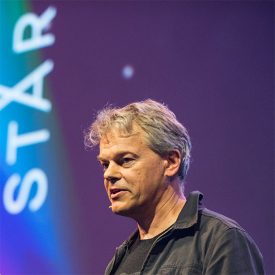 Edvard Moser is a Professor of Neuroscience and Director of the Kavli Institute for Systems Neuroscience at the Norwegian University of Science and Technology in Trondheim. He is interested in how spatial location and spatial memory are computed in the brain.

His work, conducted with May-Britt Moser as a long-term collaborator, includes the discovery of grid cells in the entorhinal cortex, which provides clues to a neural mechanism for the metric of spatial mapping. Subsequent to this discovery the Mosers have identified additional space-representing cell types in the entorhinal cortex and they are beginning to unravel how the neural microcircuit is organized. Edvard Moser received his initial training at the University of Oslo under the supervision of Dr. Per Andersen on mechanisms of memory formation in the hippocampus in freely-moving animals.

In 1995-96, he worked as a post-doc with Richard Morris on the role of long-term potentiation in hippocampal memory. In 1996, he spent three months with John O’Keefe to learn tetrode recording in the hippocampus. Edvard Moser accepted an associate professorship at the Norwegian University of Science and Technology in August 1996. He became a full professor at the same institution in 1998. In 2002 he became the Founding Director of the Centre for the Biology of Memory, a Research Council-funded Centre of Excellence. In 2007 the Centre became a Kavli Institute. Edvard Moser is the Director of the Kavli Institute.

He is also Co-Director of the newly established Centre for Neural Computation at the same institution. Together with May-Britt Moser, Edvard Moser was awarded the W. Alden Spencer Award in 2005, the Koetser Award in 2006, the Bettencourt Prize for Life Sciences in 2006, Erik Fernström’s Great Nordic Prize in 2008, the Louis Jeantet Prize and Anders Jahre’s Great Nordic Prize in 2011, the Perl/UNC Neuroscience Prize in 2012, the Louisa Gross-Horwitz Price and the Koerber Prize in 2014, and the Nobel Prize in Physiology or Medicine in 2014.