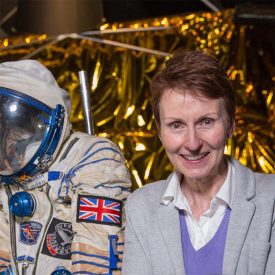 Helen Sharman is a British chemist who became the first British astronaut and the first woman to visit the Mir space station in 1991.

Sharman was born in Grenoside, Sheffield, where she attended Grenoside Junior and Infant School, later moving to Greenhill. After studying at Jordanthorpe Comprehensive, she received a BSc in chemistry at the University of Sheffield in 1984 and a PhD from Birkbeck, University of London. She worked as a research and development technologist for GEC in London and later as a chemist for Mars Incorporated dealing with flavourant properties of chocolate.

Sharman spent the eight years following her mission to Mir self-employed, communicating science to the public. Her autobiography, Seize the Moment, was published in 1993. In 1997 she published a children's book, The Space Place. She has presented radio and television programmes including for BBC Schools.

By 2011, she was working at the National Physical Laboratory as Group Leader of the Surface and Nanoanalysis Group. Sharman became Operations Manager for the Department of Chemistry at Imperial College London in 2015. She continues outreach activities related to chemistry and her spaceflight, and in 2015 was awarded an Honorary Fellowship from the British Science Association.

In August 2016, Sharman appeared as herself in an episode of the Channel 4 soap opera Hollyoaks.