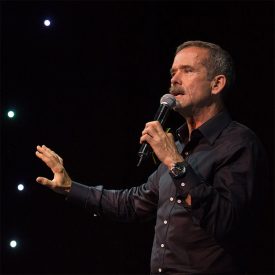 Chris Hadfield is a retired Canadian astronaut who was the first Canadian to walk in space. An engineer and former Royal Canadian Air Force fighter pilot, Hadfield has flown two space shuttle missions and served as commander of the International Space Station.

Hadfield, who was raised on a farm in southern Ontario, was inspired as a child when he watched the Apollo 11 Moon landing on TV. He attended high school in Oakville and Milton and earned his glider pilot licence as a member of the Royal Canadian Air Cadets. He joined the Canadian Armed Forces and earned an engineering degree at Royal Military College. While in the military he learned to fly various types of aircraft and eventually became a test pilot and flew several experimental planes. As part of an exchange program with the United States Navy and United States Air Force, he obtained a master's degree in aviation systems at the University of Tennessee Space Institute.

In 1992, he was accepted into the Canadian astronaut program by the Canadian Space Agency. He first flew in space aboard STS-74 in November 1995 as a mission specialist. During the mission he visited the Russian space station Mir. In April 2001 he flew again on STS-100 and visited the International Space Station (ISS), where he walked in space and helped to install the Canadarm2. In December 2012 he flew for a third time aboard Soyuz TMA-07M and joined Expedition 34 on the ISS. He was a member of this expedition until March 2013 when he became the commander of the ISS as part of Expedition 35. He was responsible for a crew of five astronauts and helped to run dozens of scientific experiments dealing with the impact of low gravity on human biology. During the mission he also gained popularity by chronicling life aboard the space station and taking pictures of the earth and posting them through Twitter, Facebook, Google+, and Tumblr to a large following of people around the world. He was a guest on television news and talk shows and gained popularity by playing the International Space Station's guitar in space. His mission ended in May 2013 when he returned to earth. Shortly after returning, he announced his retirement, capping a 35-year career as a military pilot and an astronaut.