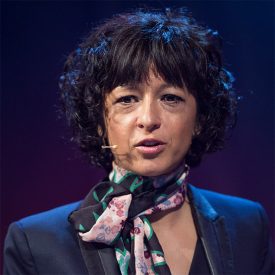 Emmanuelle Charpentier is a French researcher in microbiology, genetics and biochemistry.

After defending her dissertation, she worked at several universities and hospitals in the United States including Rockefeller University, New York University Langone Medical Center, Skirball Institute of Biomolecular Medicine (all in New York) and St. Jude Children’s Research Hospital in Memphis. After five years, she returned to Europe, first to Vienna and thereafter to Umeå Universityin Sweden where she holds a position as research leader at the Laboratory for Molecular Infection Medicine Sweden (MIMS) as well as that of visiting professor at Umeå Centre for Microbial Research (UCMR). She is Private Docent in Microbiology (2006, University of Vienna) and Docent in Medical Microbiology (2013, Umeå University). In 2013, she was appointed Professor at the Helmholtz Centre for Infection Research in Braunschweig and to an Alexander von Humboldt Professorship at Hannover Medical School (MHH) in Hannover, Germany.

In 2015, Charpentier accepted an offer from the German Max Planck Society to become scientific member and director of the new Max Planck Institute for Infection Biology in Berlin. Charpentier will retain her position as visiting professor at Umeå University, where a new donation from the Kempe Foundations and the Knut and Alice Wallenberg Foundation has given her the opportunity to offer more young researchers positions within research groups of the MIMS Laboratory.

Charpentier is best known for her role in deciphering the molecular mechanisms of the bacterial CRISPR-Cas9 immune system and repurposing it into a tool for genome editing. In collaboration with Jennifer Doudna's laboratory, Charpentier's laboratory showed that Cas9 could be used to make cuts in any DNA sequence desired. The method they developed involved the combination of Cas9 with easily created synthetic "guide RNA" molecules. Researchers worldwide have employed this method successfully to edit the DNA sequences of plants, animals, and laboratory cell lines.

Charpentier has been awarded several international prizes, awards and acknowledgements, including the Breakthrough Prize in Life Sciences, the Gruber FoundationInternational Prize in Genetics and the Leibniz Prize, Germany's most prestigious research prize. Also, in the Spring of 2015, Time Magazine designated Charpentier one of the 100 most influential people in the world (together with Jennifer Doudna).