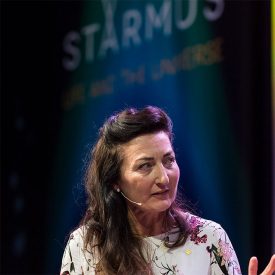 May-Britt Moser is a Professor of Neuroscience and Director of the Centre for Neural Computation at the Norwegian University of Science and Technology in Trondheim. Her work, conducted with Edvard Moser as a long-term collaborator, includes the discovery of grid cells in the entorhinal cortex. The discovery of grid cells was succeeded by identification of other functional cell types, including head direction cells, conjunctive cells and border cells and collectively the findings point to the entorhinal cortex as a hub for the brain network that makes us find our way. In combination with the place cells of the hippocampus, the entorhinal network provides a ‘coordinate system’ for on-line measurement of distance and direction within given constellations of landmarks.

May-Britt Moser received her initial training at the University of Oslo under the supervision of Dr. Per Andersen. She obtained her PhD in neurophysiology in 1995 on the structural basis of hippocampal memory. In 1995-96, she worked as a post-doc with Richard Morris on septotemporal differentiation within the hippocampus and the role of long-term potentiation in spatial memory. In 1996, she spent one month with John O’Keefe to learn tetrode recording in the hippocampus. May-Britt Moser accepted an associate professorship at the Norwegian University of Science and Technology in August 1996, but she became a full professor at the same institution in 2000. In 2002 she became Founding Co-Director of the Centre for the Biology of Memory. In 2012, she was appointed Director of the newly established Centre for Neural Computation at the same institution.