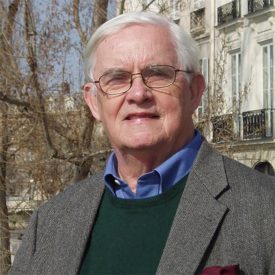 Dr. Logsdon is Professor Emeritus of Political Science and International Affairs at George Washington University’s Elliott School of International Affairs. Prior to his leaving active faculty status in June 2008, he was on the faculty of the George Washington University for 38 years; before that he taught at the Catholic University of America for four years. He was the founder in 1987 and long-time Director of GW’s Space Policy Institute. From 1983-2001, he was also Director of the School’s Center for International Science and Technology Policy. He is also a faculty member of the International Space University. During the 2007-2008 academic year, he was a Distinguished Visiting Professor at MIT’s Science, Technology and Society Program on a part-time basis. During 2008-2009, he held the Charles A. Lindbergh Chair in Aerospace History at the Smithsonian Institution National Air and Space Museum. He holds a B.S. in Physics from Xavier University (1960) and a Ph.D. in Political Science from New York University (1970).

Dr. Logsdon’s research interests focus on the policy and historical aspects of U.S. and international space activities. His book John F. Kennedy and the Race to the Moon was published in December 2010. The book was named the 2011 winner of the Gardner Lasser Aerospace History Award of the American Institute of Aeronautics and Astronautics and co-winner of Eugene M. Emme Astronautical Literature Award of the American Astronautical Society. His most recent book, After Apollo? Richard Nixon and the American Space Program, was published in March 2015. It has been selected as the 2017 recipient of the AIAA Gardner-Lasser award. Logsdon is currently working on an account of space decisions during the Reagan administration. Dr. Logsdon is also the author of The Decision to Go to the Moon: Project Apollo and the National Interest (1970) and is general editor of the multi-volume series Exploring the Unknown: Selected Documents in the History of the U.S. Civil Space Program. He has written numerous articles and reports on space policy and history, and authored the basic article on “space exploration” for the most recent edition of Encyclopedia Britannica. Dr. Logsdon has lectured and spoken to a wide variety of audiences at professional meetings, colleges and universities, international conferences, and other settings, and has testified before Congress on several occasions. He has served as a consultant to many public and private organizations. He is frequently consulted by the electronic and print media for his views on space issues and has appeared as an expert on all major television networks and public radio.

Earlier, Dr. Logsdon has served as a member of a blue-ribbon international committee evaluating Japan’s National Space Development Agency and of the Committee on Human Space Exploration of the Space Studies Board, National Research Council. He has served on the advisory committee of the Secure World Foundation, the Commercial Space Transportation Advisory Committee of the Department of Transportation, the Vice President’s Space Policy Advisory Board, the Aeronautics and Space Engineering Board of the National Research Council, NASA’s Space and Earth Sciences Advisory Committee, and the Research Advisory Committee of the National Air and Space Museum. He has served as the Director of the District of Columbia Space Grant Consortium. He is former Chairman of the Committee on Science and Public Policy of the American Association for the Advancement of Science and of the Education Committee of the International Astronautical Federation. He has twice been a Fellow at the Woodrow Wilson International Center for Scholars and in 1982-1983 was the first holder of the Chair in Space History of the National Air and Space Museum.