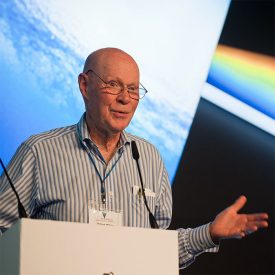 Robert Wilson is an American astronomer, 1978 Nobel laureate in physics, who with Arno Allan Penzias discovered in 1964 the cosmic microwave background radiation (CMB). The award purse was also shared with a third scientist, Pyotr Leonidovich Kapitsa, for unrelated work.

While working on a new type of antenna at Bell Labs in Holmdel Township, New Jersey, they found a source of noise in the atmosphere that they could not explain. After removing all potential sources of noise, including pigeon droppings on the antenna, the noise was finally identified as CMB, which served as important corroboration of the Big Bang theory.