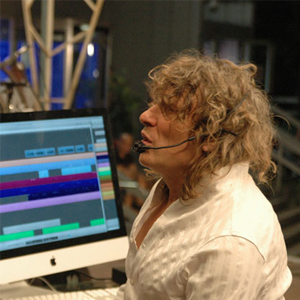 The Greek born composer, whose childhood dream was to become an astronaut, moved to New York in 1980 and studied classical composition at Aaron Copland School of Music. His debut work ANTITHESIS, in May ’89, reached the US top 10 charts of New Age / Electronic music. Since then he was commissioned to compose & perform for renowned sculptors & painters (Spyropoulos, Stamos, Masaaki Noda), for major venues and festivals around the World such as the La Mama theater of Ellen Stewart in NYC, Brooklyn Academy of Music (BAM), Rochester University, “Dei due Mondi” of Italy, Art Carnuntum of Austria, Libertas of Croatia, and in Greece at Zappeion Megaron, Athens Music Hall, Ancient Delphi Stadium “Athens 2004 Olympic Flame World Tour”, by the Tomb of the Marathon Fighters for the 2500th anniversary, in Ancient Pella for the International Marathon “Alexander the Great”, in “Promitheia” of Mount Olympus. South of Ammohostos (Famagusta) for the 40th “black anniversary” since the Turkish Invasion & Occupation of Cyprus. He was honored by the Greek Scholars of Chicago University for his sonic interpretation of Greek language in 1998, in 2000 by Urban Stages & Playwrights Preview Society alongside actress Olympia Dukakis in Central Park of NYC “Celebrating the Heritage of Greek Theater & Art”, in Athens Music Hall (Megaron) during “Aristeia 2005”for his artistic achievement outside Greece, by the Art Club “Costis Palamas” (the poet of the Olympic Hymn) for the oratorio he composed with the great National Greek poet’s poetry. He formed “Apollo Temple” a Non Profit Organization, dedicated in serving Apollo (Helios, the solar life-giving creative energy) and the Nine Muses (Sciences and Arts).

His passion for Astronomy, Greek Philosophy & Mythology is evident in a large number of works such as PARALLEL UNIVERSE, SPLIT INFINITY, DYNAMEIS, PANSELINOS (Full Moon), SYNASTRIA for Pythagoras’s theory “Music of the Spheres”. PYRAEIZOON for Heraclitus’s “Fire Ever-living” theory, work premiered in Italy with soprano Dimitra Theodossiou, performed at the Eugenideion Planetarium of Athens for the Spring Equinox Celebration 2010, featured at the National University of Athens during the SEAC conference, Société Européenne pour l’Astronomie dans la Culture, September 2013. A world tour is planned in major Planetariums during 2016, for the 2500th anniversary since Heraclitus died.