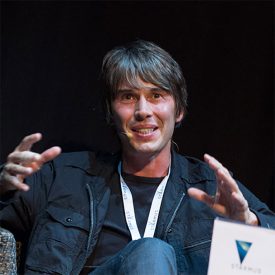 Brian E. Cox is University Professor of particle physics at Manchester University. He is best known to the public as the presenter of science programmes. Before his academic career, Cox was a keyboard player for the bands D. Ream and Dare. Cox is a PPARC advanced fellow and member of the High Energy Physics group at the University of Manchester, and works on the ATLAS experiment at the Large Hadron Collider at CERN.

Brian Cox has co-authored several books on physics including Why does E=mc2? and The Quantum Universe with Jeff Forshaw. He has appeared in many science programmes for BBC radio and television, including In Einstein's Shadow, the BBC Horizon series. Cox  has presented  and co-resented the BBC series Wonders of the Solar System,  Wonders of the Universe, Wonders of Life, The Infinite Monkey Cage, The Incredible Human Journey, The Science of Doctor Who, Human Universe etc. He has received many awards for his efforts to publicise science.