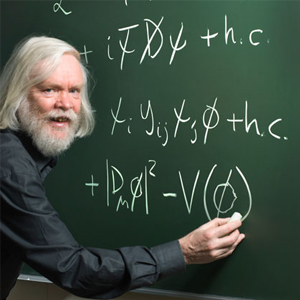 Professor John Ellis, is leading physicist of The European Organisation for Nuclear Research (CERN) and Clerk Maxwell Professor, Kings College London. His primary research interests focus on the phenomenological aspects of particle physics, but he has also made important contributions to astrophysics, cosmology, and quantum gravity Ellis is a long-term research leader at the Large Hadron Collider (LHC), where high-energy experiments have started and will take physics into a new realm of energy and time. This research also will address the physics analogues of the simple yet profound questions of human existence.

The knowledge of matter revealed by the current reigning theory of particle physics, known as the Standard Model, still leaves open many basic questions, for example: What is the origin of the matter in the Universe, how does its mass originate, what is the nature of the dark matter that fills the Universe, and are there additional dimensions of space? The answers to these questions may set the stage for future experiments beyond the scope of the LHC. He obtained a B.A. and a Ph.D. from Cambridge University and, after brief post-doc positions at SLAC and Calltech, he went to CERN where he has worked ever since.

He was awarded the Maxwell Medal and the Paul Dirac Prize by the Institute of Physics in 1982 and 2005 respectively, and has been an Elected Fellow of the Royal Society of London since 1985 and of the Institute of Physics since 1991. He has been awarded Honorary Doctorates by the University of Southampton and by Uppsala University. He has twice won the First Award in the Gravity Research Foundation essay competition, in 1999 and 2005.