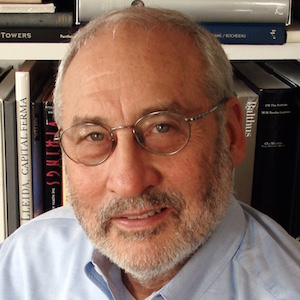 JOSEPH E. STIGLITZ is University Professor at Columbia University, the winner of the 2001 Nobel Memorial Prize in Economics, and a lead author of the 1995 IPCC report, which shared the 2007 Nobel Peace Prize. He was chairman of the U.S. Council of Economic Advisers under President Clinton and chief economist and senior vice president of the World Bank for 1997-2000. Stiglitz received the John Bates Clark Medal, awarded annually to the American economist under 40 who has made the most significant contribution to the subject. He was a Fulbright Scholar at Cambridge University, held the Drummond Professorship at All Souls College Oxford, and has also taught at M.I.T, Yale, Stanford, and Princeton. He is the author most recently of The Great Divide: Unequal Societies and What We Can Do About Them and with Bruce Greenwald, Creating a Learning Society: A New Approach to Growth, Development and Social Progress.