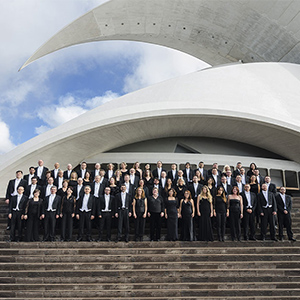 The Orquesta Sinfónica de Tenerife (OST, “The Tenerife Symphony Orchestra”), depends on Tenerife Island Council, and is considered one of the best symphony orchestras in Spain Founded as the Orquesta de Cámara de Canarias in 1935, it became a symphony orchestra in 1970. Its seat is the Auditorio de Tenerife and since its creation, the orchestra has had six regular directors: Sabina Santiago, Armando Alfonso, Edmon Colomer, Victor Pablo Pérez - honorary director-, Lü Jia and Michal Nesterowicz.

The Tenerife Symphony Orchestra has performed in all the major concert halls in Spain, Germany and UK, and the last international tour was in China. They have played with some of the top conductors, artists and soloists.

The OST has been awarded with the Grand prix de l’Académie française du disque lyrique, the Cannes Classical Awards, Diapason d’Or (in 1994 and 1995) and the Choc of Le Monde de la Musique magazine. It also received the Premio Ondas in its 1992 and 1996 editions.