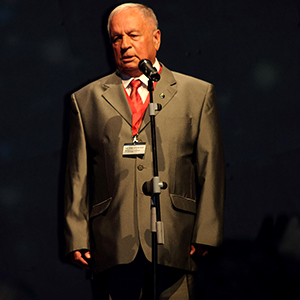 Viktor’s interest in becoming a pilot was sparked during the conflict between the Soviets and the Nazis. His siblings often told him stories of brave pilots and their adventures and he too followed in their footsteps. Upon joining the Soviet Army in 1952, Viktor requested to be assigned to flight school. Following his enlisting, Viktor was sent to the 8th Military Aviation School of Pilot Basic Training in the Ukrainian town of Pavlograd, Dnepropetrovsk Region where he was taught to fly. Viktor graduated on June 23, 1956 as a lieutenant in the Soviet air force.

Gorbatko became part of the 86th Guards Fighter Regiment of the 119th Fighter Division, attached to the 48th Air Army operating out of the Odessa Military District in Moldavia. On June 22, 1957, Gorbatko achieved the rank of senior pilot. He would not achieve the senior lieutenant ranking until August 6, 1958, and in October would achieve the military pilots ranking, third class.

Gorbatko was among the first group of Soviet cosmonauts. He began training in early 1960 but he did not reach space until 1967. His first spaceflight was Soyuz 7from 12–17 October 1969 where he was Research Engineer. This mission tested Soviet lunar equipment but a failed docking with Soyuz 8 was the last in-space test before that program was abandoned. Gorbatko was the commander of the 18-day Soyuz 24 mission in February 1977 to the Salyut 5 space station. This was the last all-military spaceflight by the Soviet Union. In 1980, Gorbatko commanded Soyuz 37 which also carried Pham Tuân, the first Vietnamese astronaut. Gorbatko and Pham Tuân flew to Salyut 6 and landed in the Soyuz 36 capsule that had earlier docked at the space station. Gorbatko spent 7 days and 20 hours in space on this mission.

After leaving the space program in 1982 he taught at the Air Force Engineering Academy in Moscow.