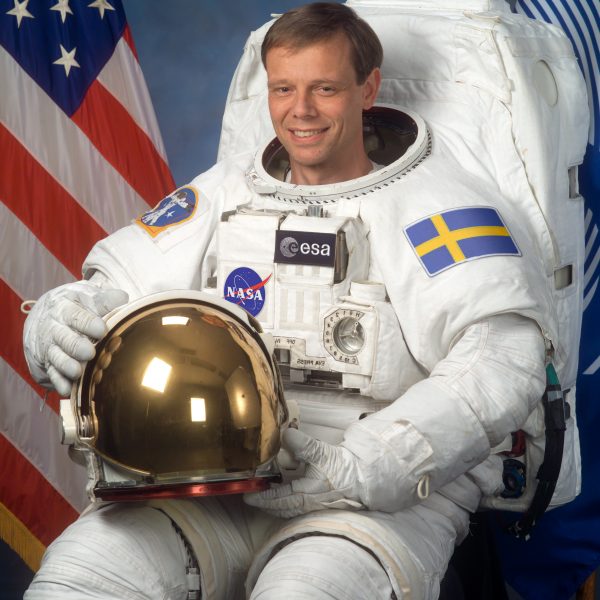 Arne Christer Fuglesang is a Swedish physicist and an ESA astronaut. He was first launched aboard the STS-116 Space Shuttle mission on December 10, 2006, at 01:47 GMT, making him the first Swedish citizen in space.

He was a Fellow at CERN and taught mathematics at the Royal Institute of Technology before being selected to join the European Astronaut Corps in 1992. He has participated in two Space Shuttle missions and five spacewalks, and is the first person outside of the United States or Russian space programs to participate in more than three spacewalks.

As a graduate student, Fuglesang worked at CERN in Geneva on the UA5 experiment, which studied proton–antiproton collisions. In 1988 he became a Fellow of CERN, where he worked on the CPLEAR experiment studying the subtle CP-violation of kaon particles. After a year he became a Senior Fellow and head of the particle identification subdetector. In November 1990, Fuglesang obtained a position at the Manne Siegbahn Institute of Physics, Stockholm, but remained stationed at CERN for another year working towards the new Large Hadron Collider project.

In May 1992, Fuglesang was selected to join the European Astronaut Corps of the European Space Agency (ESA) based at the European Astronaut Centre (EAC) in Cologne, Germany. In 1992 he attended an introductory training programme at EAC and a four-week training program at Cosmonauts Training Center (TsPK) in Star City, Russia, with a view to future ESA–Russian collaboration on the Mir Space Station. In July 1993, he completed the basic astronaut training course at EAC

From May to October 1998, he resumed training at TsPK on Soyuz-TM spacecraft operations for de-docking, atmospheric re-entry and landing. He was awarded the Russian Soyuz Return Commander certificate, which qualifies him to command a three-person Soyuz capsule on its return from space.

In October 1998, he returned to NASA and was assigned technical duties in the Station Operations System Branch of the NASA Astronaut Office, working on Russian Soyuz and Progress transfer vehicles. Later he worked as prime Increment Crew Support Astronaut for the second International Space Station expedition crew. Fuglesang also continued with some scientific work and was involved with the SilEye experiment which investigated light flashes in astronauts' eyes on Mir between 1995 and 1999.