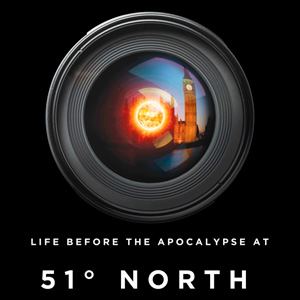 The Starmus Festival continues to strengthen its line up with the confirmation that acclaimed film director Grigorij Richters will be introducing the first private screening of his latest film, 51 Degrees.

Richters, who has been making films since the age of 7 years old, will join his fellow crew member and keynote speaker, music legend Brian May, who, as well as attaining a PhD in astrophysics from Imperial College in 2007, is responsible for the sound track on the movie

Brian May and Grigorij Richters

Ideally suited to the Starmus Festival’s theme of cosmic discovery, the film follows the life of Damon Miller (played by Moritz von Zeddelmann), a young British film maker who becomes involved in the research of asteroids, only to discover that the Earth stands on the brink of extraterrestrial disaster. Knowing the world is coming to an end, Damon finds hope in an offer made by underhand British authorities to allocate him and his loved ones places on a 2,000 capacity space station orbiting Earth. His ticket to survival rests on whether he is willing to film the last days of hysteria on Earth leading up to the asteroids hitting. Filming took place between 2011 and 2014 in and around London, initially using a skeleton crew and employing guerilla filming tactics on a major scale; with 2,500 extras used to create scenes of panic in Piccadilly Circus.