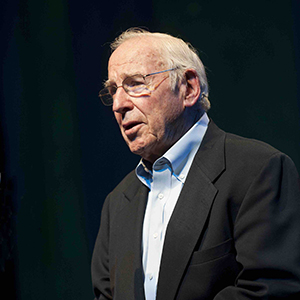 Captain James A. Lovell, Jr, joined the space programme in 1962 following extensive experience as a Naval Aviator and Test Pilot. He was backup pilot for Gemini 4 and backup commander for Gemini 9.

He was the pilot on Gemini 7, the first rendezvous of two manned spacecraft in 1965, and commander of the Gemini 12 mission in 1966. Lovell became command Module Pilot and Navigator for Apollo 8 - man's maiden voyage to the moon - and backup commander to Neil Armstrong for the Apollo 11 lunar landing mission. Lovell's fourth and final flight was on Apollo 13 in 1970.

Captain Lovell's education prepared him for the change from explorer to businessman. Since leaving NASA, he has led a successful high-executive career. He has received honorary doctorates from many universities, together with an impressive share of honours and awards. In 1994, he and Jeff Kluger wrote Lost Moon, the story of the courageous mission of Apollo 13. In 1995, the film version of the bestseller Apollo 13 was released to rave reviews.