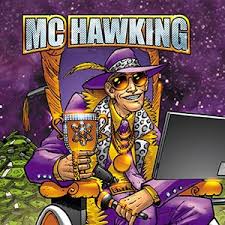 What if Stephen Hawking, in addition to being a brilliant scientist, were also a gangsta rapper? This is the question MC Hawking hopes to answer.

MC Hawking (the undisputed king of theoretical gangsta-astrophysics) is the creation of musician Ken Lawrence from Gloucester Massachusetts. Lawrence created the person of MC Hawking in the early 2000s and released several tracks to the internet utilizing a synthesized text-to-speech program to emulate Stephen Hawking’s distinctive voice. These tracks quickly attained a substantial level of internet popularity and international press interest leading to MC Hawking being signed to a record deal with Brash Music and the release of his first album, “A Brief History of Rhyme”.